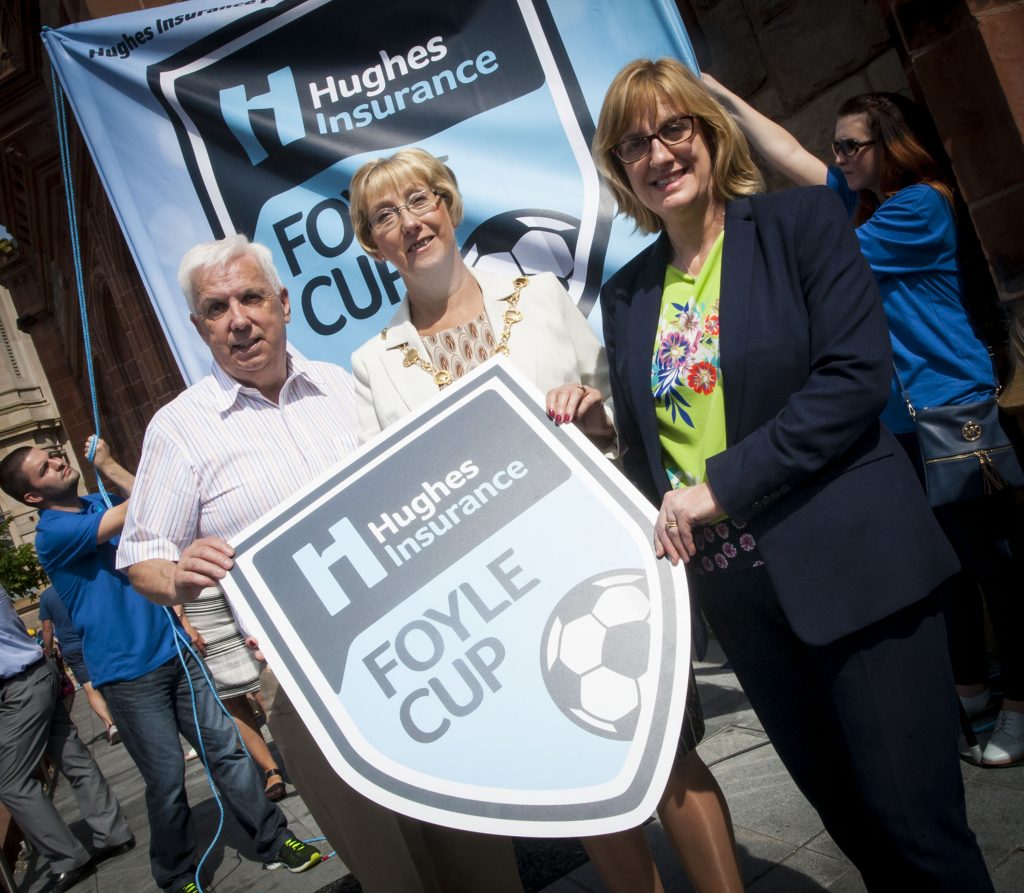 The Hughes Insurance Foyle Cup continued today (Tuesday)  and after the huge amount of games on Monday, Tuesday Morning was time for a break as each of the 310 teams took part in a Mayoral Welcome Parade. The Mayor of Derry & Strabane District Council City Alderman Hilary McClintock, welcomed the parade in the Guildhall Square.

The parade commenced at Magee Campus in soaring temperatures with over 4,500 kids walking the short distance to the Guildhall Square. Such was the length of the parade that it took almost 35minutes for all the participants to reach their destination in what was a most colourful spectacles, the many bright track suited colours happily and joyfully parading throughout the city for the Official welcome.

In welcoming the players, coaches and parents to the city, The Mayor expressed her delight that the Hughes Insurance Foyle Cup was welcoming its biggest ever entry of 310 teams, all of whom were most welcome to the area. “ Not only is the Hughes Insurance Foyle Cup good in terms of fact it was developing undoubted football skills in young players, encouraging kids to follow a healthy lifestyle but in its own way was very much contributing to building good relations as kids of all colours, creeds, religion happily parade together and play football together all week long.”  She further added that the event was a huge boost for the North West area with in excess of 12,000 bed-nights booked and an economic spend in the local economy of in excess of £1,600, 000.

In wishing teams every success during the week the Mayor concluded, “ This event has been a passport into professional football for so many local kids –local  players such as Darron Gibson, James Mc Clean, Paddy Mc Court, Dean Shields,  Daniel Lafferty, Saul Deeney, Shane Duffy,  Shane Ferguson, Shay Givens , Seamus Colman and so many more – and I know there are future international stars present today at this parade and playing in the Hughes Insurance Foyle Cup during this week.”

Matches continue on Wednesday at venues across Derry, Strabane, Limavady, Buncrana, Dungiven, Letterkenny & Moville.  Follow the tournament by downloading the Foyle Cup App in the Android and Apple App stores or by visiting http://foylecup.com

The second day of the Hughes Insurance Foyle Cup began in spectacular fashion with a parade of  310 teams, referees and officials through the streets of Derry. After the carnival atmosphere it was down to the business of competing. Cheshire club, Altrincham FC played Strabane Athletic at Oakland Park. Both teams earned a point in an entertaining draw. Altrincham scored in the early stages as long ball cleared out of defence by Luke McMurray allowed Alex Johnson to outpace the Strabane defence an slide the ball past the advancing goalkeeper. Deep into the second half Strabane athletic scored through their talented striker, Montel Atoge. A cross from fullback Sean O’Donnell was dispatched into the corner of the net. Athletic had a chance to grab the winner but Atoge’s shot sailed wide. Both teams go into their final game today looking for their first win.

Scottish champions Celtic FC got their campaign off to a winning start with a lucky win over Donegal Schoolboys in the U14 section. Celtic dominated possession in the opening stages with star player, Karamoko Dembele causing havoc on the left flank. Donegal soon settled and had the ball in the net only for an offside flag to deny them the opener. In the second half the Schoolboys made a real game of it but found themselves a goal behind with five minutes remaining. Owen Moffat stepped up to fire home a brilliant free kick from 25 yards. Donegal went close on three occasions in the final minutes and can consider themselves very unlucky to lose to their illustrious opponents.